NEUROTECH partner Imec has presented a chip that that processes radar signals using a spiking recurrent neural network. This is a world's first! The chip has been made in 40nm TSMC LPCMOS and has 339 neurons. Neuromorphic design principles enabled the imec team to get the power consumption down 100 times compared to than traditional implementations, while featuring a tenfold reduction in latency. Micro-Doppler radar signatures can be classified using only 30 μW of power. Imec envisions the first use-case will encompass the creation of a low-power, highly intelligent anti-collision radar system for drones that can react much more effectively to approaching objects. The chip’s architecture and algorithms can easily be tuned to process a variety of sensor data beyond radar, including electrocardiogram, speech, sonar, lidar streams.

“SNNs operate very similarly to biological neural networks, in which neurons fire electrical pulses sparsely over time, and only when the sensory input changes. As such, energy consumption can significantly be reduced. What’s more, the spiking neurons on our chip can be connected recurrently – turning the SNN into a dynamic system that learns and remembers temporal patterns. The technology we are introducing today is a major leap forward in the development of truly self-learning systems.”

Imec’s novel chip was initially designed to support electrocardiogram (ECG) and speech processing in power-constrained devices. Yet thanks to its generic architecture that features a completely new digital hardware design, it can also easily be reconfigured to process a variety of other sensory inputs like sonar, radar and lidar data. Contrary to analog SNN implementations, imec’s event-driven digital design makes the chip behave exactly and repeatedly as predicted by the neural network simulation tools.

Use-case: a smarter, low-power anti-collision system for drones (and cars)

The drone industry – even more than the automotive sector – works with constrained devices (e.g. limited battery capacity) that need to react quickly to changes in their environment in order to appropriately react to approaching obstacles.

“Hence, a flagship use-case for our new chip includes the creation of a low-latency, low-power anti-collision system for drones. Doing its processing close to the radar sensor, our chip should enable the radar sensing system to distinguish much more quickly – and accurately – between approaching objects. In turn, this will allow drones to nearly instantaneously react to potentially dangerous situations,” says Ilja Ocket. “One scenario we are currently exploring features autonomous drones that depend on their on-board camera and radar sensor systems for in-warehouse navigation, keeping a safe distance from walls and shelves while performing complex tasks. This technology could be used in plenty of other use-cases as well – from robotics scenarios to the deployment of automatic guided vehicles (AGVs) and even health monitoring.”

“This chip meets the industry’s demand for extremely low-power neural networks that truly learn from data and enable personalized AI. For its creation, we rallied experts from various disciplines within imec – from the development of training algorithms and spiking neural network architectures that take neuroscience as a basis, to biomedical and radar signal processing and ultra-low power digital chip design. That is where imec really makes a difference,” Kathleen Philips, program director of IoT cognitive sensing at imec, concludes. 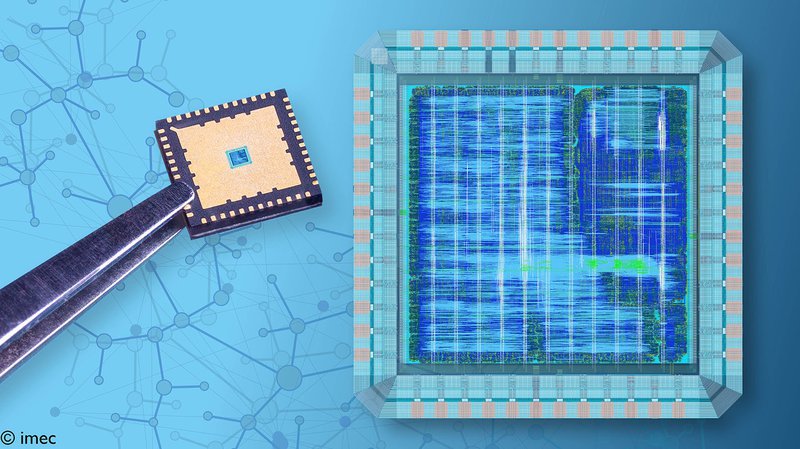 Stay tuned to NCT news by subscribing to our newsletter.