By Sam Sutton and Michael Schmuker.

One of the many things that makes the Capocaccia Workshop so unique is the concept that participants form groups to work on neuromorphic demos, to be presented on the last day of the workshop.

Each year, NEUROTECH awards a prize, worth 500 €, for the best neuromorphic demo at the CapoCaccia workshop. In 2019, a cross-institutional team of five young researchers convinced the jury with their project on an event-based electronic nose.

The CapoCaccia 2019 winning work group consisted of Damien Drix, Samuel Sutton, Rebecca Miko (Schmuker lab, University of Hertfordshire, UH), Thorben Schoepe (Chicca lab, Bielefeld University) and Franz Marcus Schüffny (Mayr lab, TU Dresden). The UH members went to CapoCaccia with the intention to demonstrate the capabilities of Damien’s new event based e-nose hardware in the task of olfaction based robotic navigation. They were joined by Thorben and Franz Marcus at the beginning of the workshop. The concept they wished to demonstrate with their demo was that odour based transients caused by gas in a turbulent flow can be exploited to enable two e-nose boards to infer the direction of the gas source.

The team worked hard on their implementation, but as demo day drew closer, it slowly became evident that it will be very difficult to realise the closed-loop robotic demo that was originally planned in the remaining time. Instead, rather than presenting a half-baked but fully robotic demo, the team decided that they would focus their resources of producing a full-fledged and fully working demo in a static desktop setup. The resulting demo consisted of a visual and auditory display of the operation of an event-based, stereo-osfritic (i.e., with two sensor groups) electronic nose. The setup was stimulated with puffs of volatiles emanating from an alcoholic extract of the berries of the Myrtle shrub (Myrtus communis L.).

Based on Thorben’s work, the team integrated his SpiNNaker implementation of the Time Difference Encoder (TDE) (Milde et al. 2018, Neural Computation) model so that spike trains from the left and right e-noses could be fed into a TDE based spiking neural network. Real-time cross-correlation plots showed raw analogue signals and cross-correlation comparison of the two e-nose boards. Utilising a SpiNN-3 board, the team was able to create a real time spiking event based estimation of gas source direction. Input spike trains were created in real-time using the DVS thresholding method on the derivative of the high-pass filtered raw analogue e-nose signals. An average count of output spikes from the SNN were plotted as another interpretation of the gas source direction. The team demonstrated that both approaches were capable of accurately inferring the source direction of the gas puff from the stereo sensor setup.

The team also added an auditory display to the event-based nose, in the form of a small speaker that produced a click upon each event generated. The team was pleasantly surprised at how well the live spiking sound produced from the e-nose output was received during the demonstration.

The winning demo has demonstrated that collaboration between young researchers from different disciplines, groups, and countries in the scientifically dense and rich setting of the Capocaccia workshop, can catalyse the development of groundbreaking neuromorphic technology.

This year again, we will be awarding a prize for the best demo at the Capocaccia workshop. Come to Capocaccia, pick a team and give your best work, and you might just have a chance of winning! Best of luck! 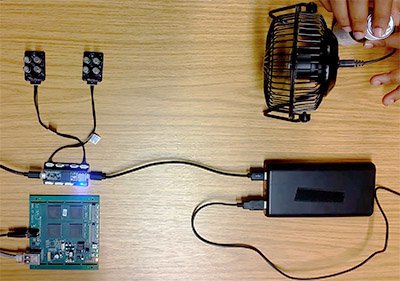 Figure: The winning demo reproduced at the University of Hertfordshire.