The pioneering space imaging project Astrosite™ of The Western Sydney University research team is the 2019 winner of the prestigious Misha Mahowald Prize for Neuromorphic Engineering.

Neuromorphic engineering is a field of electrical engineering that takes inspiration from neural systems in biology to build brain-like technology. The Misha Mahowald Prize – named for one of the most influential pioneers of neuromorphic engineering, and valued at $10,000 – is awarded each year to recognise outstanding research in the field.

The team has been recognised for the Astrosite™ – a mobile space situational awareness (SSA) module based on event-based neuromorphic sensors that was unveiled in February 2019 at the Australian Avalon Airshow. The neuromorphic sensors offer a novel means of performing SSA tasks and provide capabilities that cannot be achieved using conventional astronomy cameras. These benefits include the abilities to operate during daylight conditions, image under a wide range of lighting conditions, and to perform continuous and frame-free sky imaging.

“With tens of thousands of man-made objects currently orbiting in space, the risk of collision between debris, satellites and spacecraft has become a serious concern for organisations with a commercial interest in space, as well as national and international defence agencies,” says Associate Professor Cohen.

“The Astrosite™ uses event-based sensors that are inspired by the human eye, in which each pixel operates independently to detect only local changes in light intensity, in contrast to standard cameras where all pixels are captured at the same instant in time. This gives the event-based sensors an unprecedented resolution in time and dynamic range of intensity.”

The Misha Mahowald Prize is managed by iniForum GmbH, Switzerland, and decided by a jury of internationally recognized experts

Associate Professor Cohen will accept the Prize on behalf of the ICNS team at a special awards ceremony as part of the 2020 CapoCaccia Workshop Conference Toward Neuromorphic Intelligence in Sardinia, Italy. 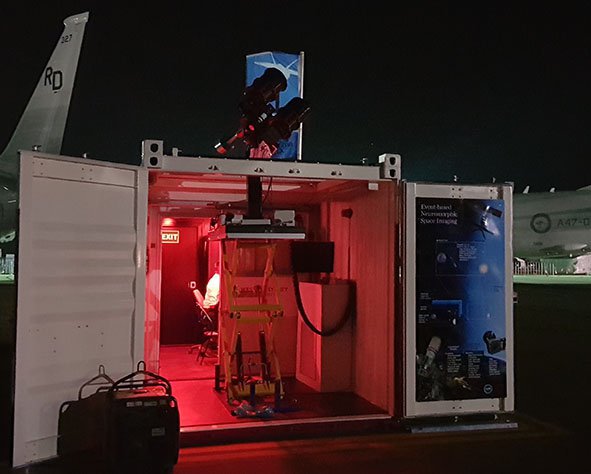