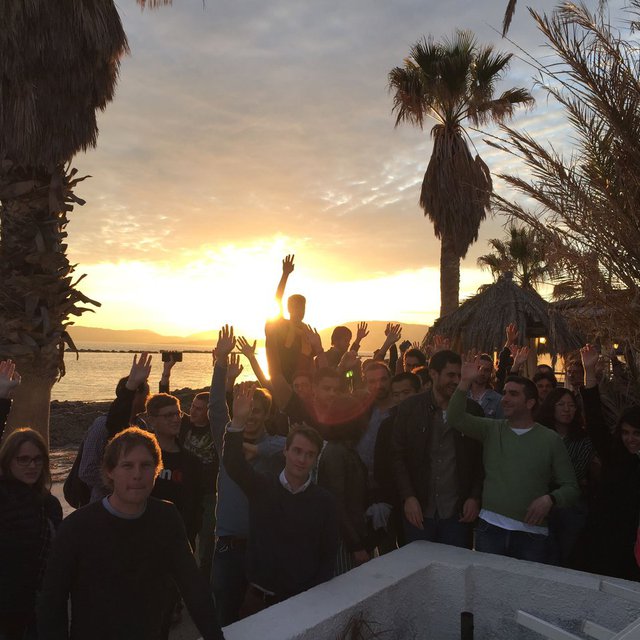 From Apr 23 - May 04, 2019 the 13th CapoCaccia Cognitive Neuromorphic Engineering Workshop took place at the Hotel dei Pini located close to Alghero, in the beautiful island of Sardinia, Italy.

This conference has been running every year since 2007, and this is the 6th time I have personally been able to attend. The first time I was in CapoCaccia everything was new and imposing. Now, some years after and 6 CapoCaccias later, I, together with others, had the opportunity to be part of the organizing committee of this meeting.

Every year the CapoCaccia workshop brings together neuroscientists, mathematicians, physicists, engineers, and psychologists from around the world to discuss and work on Computational Neuroscience and Neuromorphic Engineering. This year we were approximately 100 participants.

Each day of the meeting starts in the morning with discussions lead by experts on different topics related not only to Neuromorphic Engineering but also to Neurobiology, Robotics, and Computational Neuroscience. After lunch, there are hands-on workgroups mainly organized by Ph.D. students belonging to different research groups from all over the world. They carry out concrete projects where other participants can join and be a part of, interacting with new software and/or hardware. To promote interactions among all participants we have a “mandatory” (what the program says) social and sports break at 5 p.m. Everybody stops working and joins different activities. This year we had volleyball, football, tennis, and swimming. After the break people gather in the bar to celebrate victories and defeats equally. After a shower (hopefully) and dinner, discussion groups and recreational groups like the one for watching Game of Thrones (I kid you not) are formed bringing people even closer together.

Starting last year, we asked all participants to give a 6-word statement as an introduction, and since this is my 6th CapoCaccia, I would like to list 6 points as to why this workshop still surprises me:

This workshop has always been very special for me, not only because it reminds me of the time I have been at the Institute of Neuroinformatics (University of Zurich and ETH Zurich), but also why I chose to be an interdisciplinary scientist and work at the interface between neuroscience and computer science: it is challenging and yet incredibly enriching and fulfilling.